It took us nearly two days to get to Rhodes.  As far as we could see there had been no signs of refugees and as we weaved our way in and out of the various islands the sea remained relatively calm. Late on the afternoon of the 10th the wind got up to around 25 knots as we passed the narrow passage between Nissos Nisiros and the Turkish coast.  I’m proud to say Ruth, on the helm at the time, handled herself like a veteran.

Despite our best efforts we did not arrive at Rhodes until just after midnight on 10/11 November.  Strong currents in the approaches to Rhodes and a steady headwind slowed our speed to 2 knots.  Jon reckoned at one point that we were actually going backwards!

This was the first time we had arrived at a destination so late and predictably but in this case understandably, we could not get into the harbour for safety reasons.  I had already called ahead to the Mandrake Marina to be told that they would not allow us to enter the marina after dark.  They advised us to anchor outside and enter in the morning.

So our first exercise in anchoring the boat took place at around 0100 on 11th November.  We dropped anchor just off the three windmills to the east of the harbour wall after a faultless anchoring manouver by Alan and we settled down for the night – all except me as at every bump or scrapping noise I had visions of Lothian Sky slowly breaking  herself up on the rocks and I dreaded to see what I would find in the morning.  I knew that these were the sounds that a boat makes at anchor – just the movement of the chain can sound like the keel coming apart – but it didn’t help.

In the morning we woke to a sunny day and a brisk 10 knot wind which messed up the sea and made the weighing of the anchor a bit of an adventure.  Rhodes would be our port of exit from Greece so we decided that we would call in there for only the time it would take to fuel up and for me to get the exit processes sorted out.  We were now so close to Cyprus that, really, all we wanted to do was get there and make an end to the odyssey.

Rhodes is a beautiful place with a rich variety of architecture mixing the ancient site of the Colossus with crusader castles, Venetian-Style towers and archways and modern marina facilities.  It’s the sort of place you could spend weeks exploring.  As we sailed into the harbour we had given ourselves about four hours.  Arriving at Rhodes is quite something.

The sight of the ancient Colossus can still be seen as you enter between the harbour entrance, guarded by what appeared to be two deer or antelope of some kind – not sure about them.  There are various stories as to the founding, building and dimensions of the Colossus and several paintings show it astride of the harbour entrance

but the Rhodians themselves seem to be comfortable with its location to the left of the harbour entrance, where stands today some kind of defensive rounded battlement, built I think at the time of the Venetian occupation of Rhodes (or it might have been the Knights Templar).  In the painting it is where the right foot of the statue is planted.  The harbour itself is remarkably unchanged since the time of this painting.  We eventually moored up to the left at about the middle of the picture.

Now to give you some idea of the bureaucratic logistics of Rhodes Harbour, the Port Police Offices are located today at a point just to the right of the statue’s left foot, out of scope of the picture.  The port authority and customs offices are located just about where the blue-domed building is located in what is now a very up-market tourist marina area where the large Mediterranean cruise ships come in.  The distance between them is about a mile and a half.

I was directed to go first to the police office, but that was wrong.  The police officer told me that I had to go to the port authority first to check out the crew list, and then come back to them to hand in the duly stamped Transit Log. A total distance of three miles ….. on foot!

The bureaucracy for once was not a problem.  Everyone was very helpful and friendly and I completed the processes without misadventure.  The problem I had was trying to navigate my way to the tourist area and back.  The streets are narrow and the traffic is challenging.  I decided in the end not to use the pedestrian crossings as it seemed to me that the locals looked on them as target zones, accelerating with obvious indignation towards anyone with the audacity to step out in their way.  I gradually noticed that no one else was using them, I took the hint!

After a good hour or so I managed to get back to the boat, intact, to find that we were all fuelled up and ready to go. 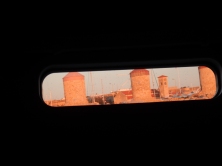 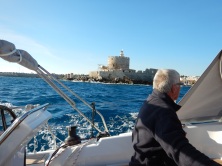 That tower is where the Port Police are now located

we exited Rhodes and we were on our final leg to Cyprus, a distance of 275 miles that would take us the best part of two days.  We expected to arrive in St Raphael Marina, Limassol some time on Friday morning ….. Friday the 13th!