In all my preparations for this passage I had been warned about the infamous Bora, which blows unpredictably in the Northern Adriatic and can obtain hurricane force dimensions. Like all such tales you tend to take them with a pinch of salt, but I would advise you not to do so in the case of the Bora. We did not experience hurricane winds but 32 knots and 3 to 4 metre waves were quite sufficient for me, and this was only the first night!

I was immediately thankful that I had engaged the services of Alan O’Boyle and was fortunate that John Campbell was also along. Their calmness and controlled skill throughout the all-night fight with the Bora was something to observe. I say observe because Jon and I did nothing but hang on and, before any of the others gets an oar in, I also christened the plumbing system of the boat and can confirm that the sink can cope with the entire contents of my stomach without any problem! Once I got that out of the way I was fine.

In fact Lothian Sky came through this baptism of fire with great credit and it became clear to me that this boat was well capable of getting us to Cyprus. The only problem we experienced with the boat was that, at some stage during the night, the entire contents of the fresh water tank (120 L) emptied into the bilges. Luckily we had loaded plenty bottles of drinking water but with our first stop in Murter in Croatia still some 10 hours away, washing became strictly rationed. By the way, for those of you unfamiliar with a sailing boat water used for other bodily purposes is drawn straight from the sea – so no problem in the bodily functions department. 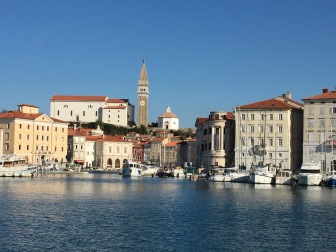 The calm before the storm. For reasons that you might be able to imagine, we do not have pictures of the storm so you will just have to take my word for it!

The day dawned on blue skies and relatively calm seas.  Alan and John went off to have a well earned sleep (Alan had completed a marathon stint of 10 hours at the helm in fierce sea conditions) and we proceeded on towards Murter.  The bilges were full despite our efforts to empty them using the bilge pumps, hand-bailing etc. At this stage we did not know the source of the problem but took limited comfort from the fact that at least the water did not taste salty. Our big fear was that the tank had somehow sprung a leak, which would have been a serious problem and could well have brought the expedition to a premature halt. Roll on Murter and running repairs.